A Long and Winding Road (continued)

My narrative continues with my stay in the pulmonary wing at Le Centre Hospitalier de Béziers (CH Beziers).

After the fluid was removed from my right lung, the fluid was sent to the lab to be analyzed and the results confirmed that it was a lung infection. However after a more in-depth investigation of the fluid, it also showed that the non-Hodgkin’s lymphoma, that I was originally diagnosed and treated for 17 years ago, had a made a recurrence.

I was given several antibiotics to attack the infection. After a couple of days of antibiotics, I could feel my strength returning, along with improved breathing capacity. Meanwhile, preparations were being made to transfer me to Le Centre Hospitalier Universitaire de Montpellier, Saint Eloi (CHU Saint Eloi), where my oncologist/hematologist practices.

The first attempt at the transfer was interrupted by a very rare event in the south of France – a snowstorm. After two hours in the medical taxi – and not even getting halfway from Beziers to Montpellier – we had to turn around and, after another two hours, arrived back at CH Beziers, where they hadn’t given up my bed, on the chance that I would return.

Finally two days later, the snow had for the most part melted and I finally left CH Beziers and was checked in to CHU Saint Eloi. My hematologist confirmed that I would need to begin chemotherapy, but first the main priority was to get the infection under control. I had many tests to monitor my situation. One of the crucial tests was to confirm that the lymphoma that had appeared was indeed the same type that I was diagnosed with back in 2001. When the results confirmed that the lymphoma was the same, it was a relief because we knew that I responded well to treatment before, and was confident that I will once again. Who could imagine that someone could be happy to have a confirmed diagnosis of cancer? 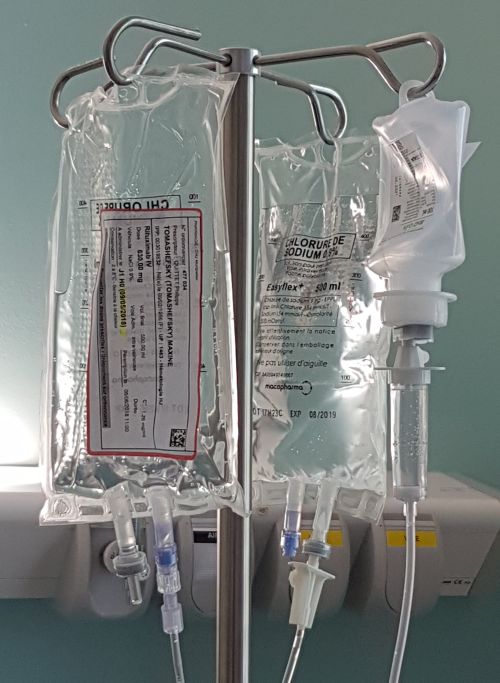 With these results, the treatment plan could be established. The protocol is six rounds of chemotherapy, with each round consisting of two back-to-back days as an outpatient, spaced 28 days apart. The first round was done while I was still in the hospital. Following this first round, I developed a low-grade fever, a result of the tail-end of fighting the infection. I was not able to leave the hospital until the fever broke.

After a few days of continued antibiotics, the fever finally started cracking until it finally broke. I was finally going home after 23 days in two hospitals.

In conjunction with my release from the hospital, a team of nurses sprung into action. There was a check-out nurse who was responsible for ensuring that everything was done to prepare me to leave the hospital as well as coordinating all of the medications that I would need with my neighborhood pharmacy. There was a coordinating nurse who arranged upcoming home visits, supplies, paperwork – even down to arranging medical taxis for the next few scheduled trips to the hospital, for chemo, doctor visits etc.

I have access to day and night nurses at the hospital, who are only a phone call away. Of course there are language barriers, but they always find someone that can speak a little English, and Steve speaks a little French, so we always manage to communicate.

There is a rotating team of three home nurses that visit me to take blood, give me injections and change the dressing on my picc line, all on the well-documented schedule organized by the coordinating nurse. In fact, they provided a customized binder containing all of the instructions for the doctors and nurses, places for the nurses to document their actions, as well as all of my prescriptions – and there are many! I take a number of pills daily, some for five days after the treatment and some for the entire six months as well as a daily prescription mouthwash to prevent sores and fungus in the mouth, common side-effects of chemo.

As one of my girlfriends said “It is a full time job to keep up with all of this.” Fortunately, my Steve has it all organized in the diary on my phone, and it beeps with a reminder of all of these things to do throughout each day.

I have to say that the French healthcare system is #1 in the world. The doctors, nurses and the hospital staff were incredible. They were supportive, understanding and caring people. I am provided with a taxi to take Steve and I to my doctor’s appointments and all chemotherapy appointments in Montpellier – which is 45 minutes from our house.  Not to mention our village pharmacy, who delivered all of my medications to our house the day I came home from the hospital.

It is so good to be home with Steve and our many supportive friends. The support from our family and friends in the USA, France, UK, Canada, Australia, Belgium and Israel is what helps keep me going.

An adventure in the journey of life – I stay strong and positive and am thankful and grateful for everything – everyday.

I look forward to going home to our kids and grandson Isaac when my six chemotherapy treatments are behind me. It is what keeps me going…

7 thoughts on “A Long and Winding Road (continued)”

This site uses Akismet to reduce spam. Learn how your comment data is processed.